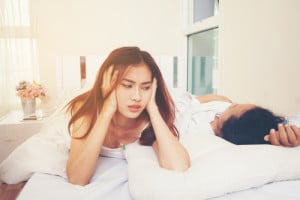 Obstructive sleep apnea is a condition also covered in general dentistry that causes the airways to block when you sleep leading to pauses in breathing or shallow breaths. One may stop breathing for a few seconds to minutes and it can happen up to 30 times in just an hour. When one resumes breathing, a loud gasp or snort is often heard. Most people are unaware of what’s happening to them but know that they simply experience disturbance during sleep. The worst thing about untreated obstructive sleep apnea is that it reduces the flow of oxygen to other vital organs and can cause irregular heartbeats.

Are you suffering from obstructive sleep apnea? You may be experiencing any of the following:

Sleep apnea may also affect children. The symptoms among children may not be as obvious as in adults. They include:

If you suspect that your child may be suffering from sleep apnea, you may want to check with your local dental office Richmond Hill for assistance. Untreated sleep apnea can get worse overtime and bring about serious health concerns.

There are people who are at an increased risk of obstructed sleep apnea. Modern family dentistry recommends that certain individuals get checked for sleep apnea if they experience the major warning signs. For instance, individuals who are overweight or obese usually have a thick neck or smaller airways and hence may experience difficulty when breathing during sleep.

If you have enlarged tonsils, you are at high risk of sleep apnea. This is because the windpipe could be blocked preventing sufficient oxygen from getting to the lungs and aiding breathing. Having a larger than usual tongue can also increase your risk of sleep apnea. The tongue also blocks the airway leading to breathing difficulties.

Men are more likely to get obstructive sleep apnea than women. The condition is also more common among older people than the young. It is actually considered a common effect of aging.

Lifestyle habits such as smoking can also put you at an increased risk of sleep apnea. Individuals who are suffering from diabetes and high blood pressure are also more prone to obstructive sleep apnea.

Obstructive sleep apnea can also be treated using dental appliances. There are mandibular advancement devices that are designed to help prevent the tongue from blocking the airways in the throat and move the lower jaw further towards the front. These devices are simply designed to make sure the airways remain open when you sleep. A professional dentist in Richmond Hill will be able to evaluate your condition and determine a device that is most suitable for you.

Eva is super friendly and nice. I am really happy I got to know Dr. Behrooz and staff. Excellent work!!!